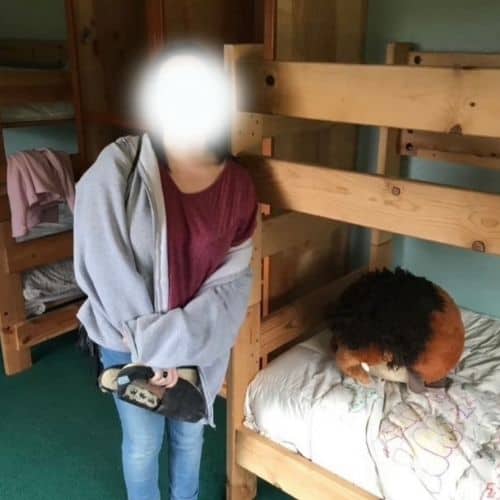 In the summer of 2015 my parents had hit a wall with me. They decided that I would be sent to a Therapeutic Boarding School in Montana. Turning Winds is located in Yaak Montana and has a history of abuse allegations and issues with law enforcement specifically in 2006 after they beat a Student who was trying to escape.

On a large property the school is a renovated hunting cabin with the school in the basement, rooms and kitchen on the first floor and therapists up on the 2nd story.

When I arrived I was strip searched and watched my parents cry as they said their goodbyes to me.

That’s when my whole life changed.

The whole energy of the place shifted when my parents left and I knew this was not the place I had read about on the website. We were subjected to inhumane treatment and punishment. Including something called SOLO, spending days to months in a chair facing the corner with no interaction. Forced labor as punishment as well as weekly. Food restricted as punishment. Staff are homophobic and racist. Staff are not trained or screened before being hired and would physically and mentally abuse students including myself. We would sometimes be put on something called a group punishment where we would sit in a field for days and no one could look at one another or talk to one another or else we would be extended meaning the time we spent out there would be prolonged.

I watched students attempt suicide and be put on punishment for it. One child was molested by other students in his first hour of arrival and was placed on a punishment for it happening to them. I struggled with self harm and had the name “Cutter” given to me from staff members so that’s what they would call me instead of my birth name. We were humiliated and shamed.

There was a heavy religious undertone as the school is owned by a Mormon family. Although it is not a religious place we were not free to practice other religion other than Christianity. Extreme brainwashing takes place and you have no option other than to fall in line. If you do not you will spend all of your time sitting in a corner, doing forced labor, and isolated from others until you do so.

All phone calls are monitored and we got one every other week for 30 minutes. We were forced to smile for pictures and wrote happy letters home every Saturday and if we disclosed the true horrors going on inside our letters would have to be re written before they could be sent out. I have many stories to share but they all are the same, inhumane punishments, brainwashing, and abuse at the hands