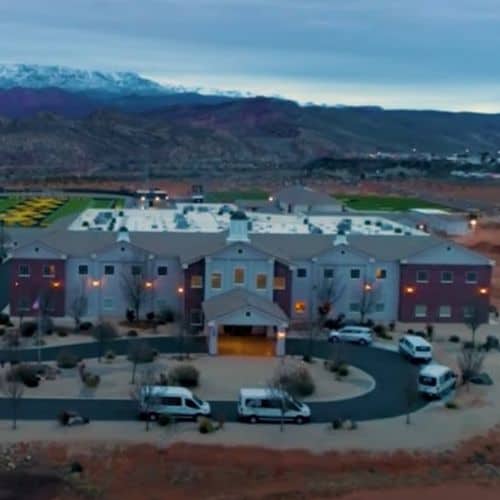 I got here early 2013, upon arriving I was stripped of all individuality, warmth or comfort, and what little innocence I had left. Getting there, I was on self-harm watch it started of being mainly females that searched me, but sometimes there was men. At least 3 times, I had to strip bra and underwear off in front of grown men for this search. When my parents dropped me off, they confirmed they didn’t serve fish (allergies), they did and I didn’t eat it they sent me to RFI.

I ended up having my therapist Becky restrain me for crying, she pushed on my wrist to where there was a snap and pain, I’ve fractured my ankle it was about that level of pain. For weeks my wrist was purple and swollen and hurt to have pressure put on it or be touched, they even made me do push-ups on it for being in RFI.

I would send letters to my mom, about health issues, things i was witness too like Pamela or how utterly depressed I was. Becky put a stop to my mail “if you keep sending letters like this, she might think something is wrong” and she’d hand me back my letters.

I had moccasins rash on both feet, got it from the ASTRO terf. I went 2 months none treated, they refused to take me to a doctor, and they weren’t sending my letters, so I had to wait for my visit with my mom. After showing her my feet, I was sent to a doctor where I had 3 planter warts removed, and had my rash addressed turns out their “topical solution ” wasn’t going to help my rash. I needed steroids and an anti-fungal orally to get rid of it. After having my foot cut and told not to run on it for a few days they made me run the mile literally right as i got back.

They kept the place so cold and I was top bunk right next to the ac vent. I wouldn’t sleep until i was exhausted, because I’d spend my night shivering turns out I’m anemic and they refused to give me another blanket and wouldn’t let my mom send me a thick one.

They had a school bomber (he was either schizo or evil genius). He tried to poison girl’s campuses with apple seeds. I learned apple seeds contain arsenic that day and when saved for the entirety of ones stay ground up and mixed into food does cause illness. We all got sick, but they told us drink water and run. Some girls were vomiting as we ran.

There were a bunch of people who tried to make psychedelics from rotten oranges and tooth paste that summer I went. As punishment we worked out in ungodly hot temperatures. I remember people collapsing from how hard they worked us, people were screamed at to get up. My shoes melted on the Astro terf, from the heat. They said “had anyone come forward we’d have been exempted”, the water that they wanted us to drink that day the pipes were directly under the black pavement. As soon as we turned that water on it was scolding hot, we couldn’t drink from it easily and they refused to let us l